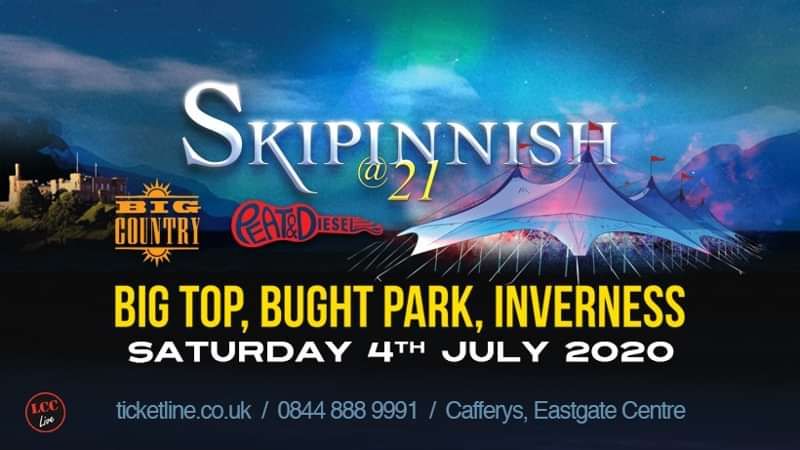 Live In The City

£37.50
Entry Requirements: Under 16s must be accompanied by an adult over 18
Buy Tickets

Skipinnish are to return to Inverness in 2020 to headline the Big Top Tent in Bught Park on Saturday 4 July 2020.

Today’s announcement follows the massive success of the band’s 20th anniversary show in Inverness in July, where they performed to over 4,500 fans.

LCC Live is bringing the Scottish Celtic band back to Inverness, for the first of two major shows for the band next year. For their Inverness show, Skipinnish will be joined by special guests including the renowned Scottish rock band, Big Country and Peat & Diesel, the up and coming band from Stornoway. Gates open at 3pm.

Formed in 1999, the last few years have seen Skipinnish rocket to the very top of the Celtic music scene and their mix of chart-topping songs and powering tune sets is continuing to attract new fans at an astounding rate. Their Inverness gig last year, was their biggest to date, and as their popularity continues to grow, Skipinnish have committed to return to Inverness to headline the Saturday night in the Big Top Tent.

“We had such an amazing show in Inverness in July. Performing a concert of that size in the Highland capital was a dream come true. We can’t wait to return, and this time headline the Saturday night in the Big Top at Bught Park. Come and join us and sing your hearts out and go wild!”

This is the first (of many!) music events for 2020 to be confirmed by LCC Live, the biggest producer of live music events in Inverness and the North of Scotland.

“We had such a great weekend of live music in the Big Top Tent last year, that we’re delighted to be bringing it back in 2020.

“Skipinnish were out of this world when they performed this summer, and their fans had the most amazing night. We’re looking forward to welcoming Big Country and Peat & Diesel too – we’re planning a great summer of live music!”