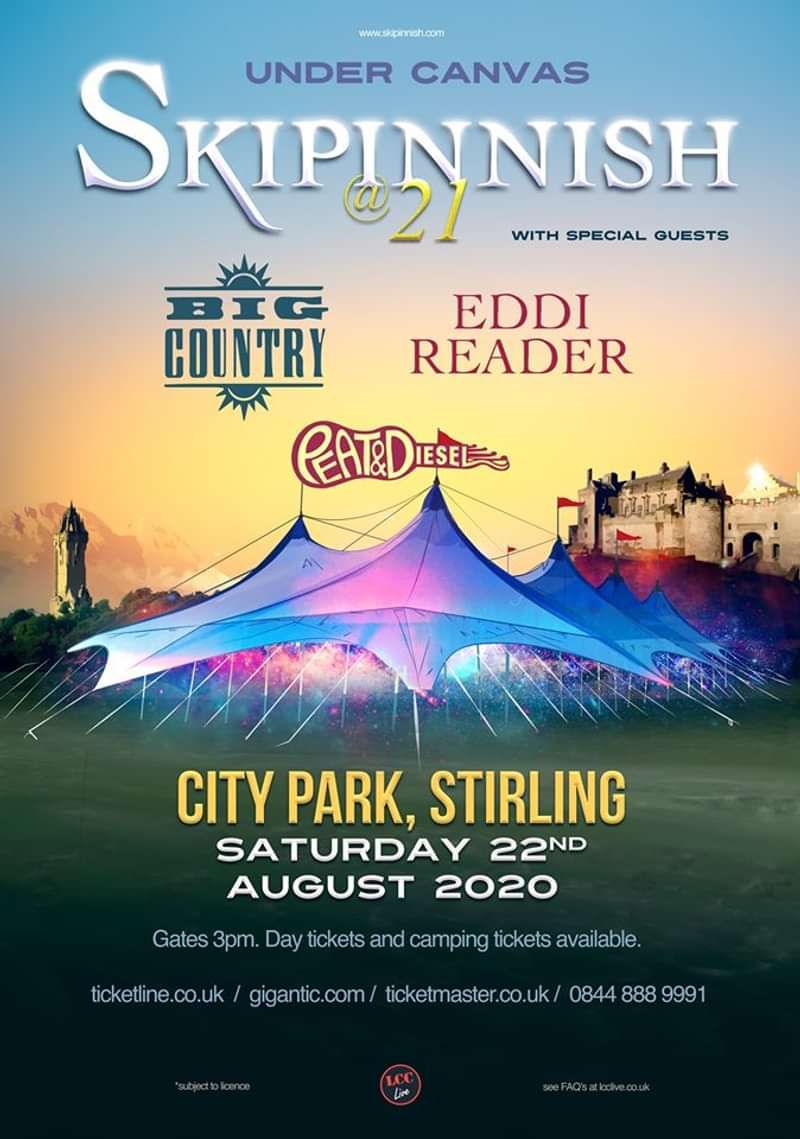 From £39
Entry Requirements: Under 16s must be accompanied by an adult over 18.
Buy Tickets

Skipinnish has today (Tuesday 19th November) announced that it will headline a special Summer show, Under Canvas, in a Big Top in Stirling’s City Park on Saturday 22nd August 2020.

From humble beginnings performing in pubs, clubs and village halls in 1999, the rise of Skipinnish over recent years has been astounding. The band has created a trademark mix of self-penned Celtic songs and strong tune sets along with now classic anthems such as Walking on the Waves, The Island, Alive and Western Ocean. The result has been a huge wave of popularity with sell-out shows across the country’s most prestigious venues, chart hits and an ever-growing home and international fan base. Skipinnish will be joined through the afternoon and evening in Stirling by a host of special guests, including the renowned Scottish rock band, Big Country; the three-time BRIT award winning artist, Eddi Reader; and the up and coming band from Stornoway, Peat and Diesel, who recently have hit the Scottish music scene like a Hebridean storm! Gates open at 3pm and more artists will be announced closer to the show. And, for those fans looking to make a weekend out of it, organisers are offering camping tickets, available for the Friday and Saturday nights (21st and 22nd August). The dedicated area will be in City Park, close to the music arena, and for those camping on the Friday night, a special party is being hosted.

“This will be the biggest Skipinnish gig yet and we are very, very excited! The prospect of performing under the majesty of Stirling Castle, to the biggest gathering ever of our amazing fans, is incredible. The last few years have felt like we are living in a dream, with more fans and bigger gigs in more exciting venues than we ever could have imagined. Stirling on the 22nd of August 2020 will be the highpoint of our musical voyage so far! We cannot wait!!”

“We’re thrilled to be bringing Skipinnish and their special guests to Stirling’s City Park for a special afternoon and evening of live music in the Big Top Tent. Skipinnish’s live performances are always out of this world, and we know that those attending will have a great night.

“In addition, for those fans wanting to make a weekend out of it, we are offering the opportunity to camp before and after the concert, in a dedicated camping area close to the music arena. It is going to be a great weekend in Stirling, so please come along and join us.”